The ozone layer and human health

Before considering the story about the influence of the ozone layer on the health of the human population, we should address how much we actually know about what ozone and the ozone layer are. Many people have learned about them in schools, many of us in colleges, and beyond that some pursued information about them through professional study. However, we're not here to talk about who knows and who doesn’t, but what surrounds us and what has befallen us, whether we like it or not.


What is the ozone? Ozone is a molecule composed of three Oxygen atoms, with the chemical formula O3. It was discovered in 1785, but was thought to be of no particular significance. History states that it was found in 1840, when it was named after the Greek verb όζω (smell) due to a specific odour and to its chemical composition, which was established in 1872. Ozone belongs to a group of unstable molecules and due to this instability at high temperature and pressure it decomposes, 2O3®3O2. Scientifically, this is significant because it prevents the breakthrough of UV (hn, ultraviolet) radiation and because of that it is important for the depletion of ozone, and on the other hand, it has a negative impact on the health of living organisms when it exists near the surface of our planet. That ozone is called "bad ozone". We should bear in mind that air pollution caused by ozone has nothing to do with ozone formed naturally in the stratosphere far above the air we breathe. Naturally formed ozone prevents UV radiation as mentioned above, and it is an integral part of the ozone layer, located 11- 48km above the Earth's surface. The thickness of the ozone layer is measured with a spectrophotometer, and the data are measured in Dobson units. Let’s assume, in order to clarify how to determine the DU we take for example the thickness of the ozone layer of 0.01 mm. At a temperature of 0°C and at a pressure of 1 bar ozone in the stratosphere is 1DU.


Ozone depletion happens due to the chemical decomposition of stratospheric ozone, as a consequence of the impaired O2/ O3 caused by the presence of halogen atoms. Cl (chlorine) in the stratosphere is an example of the presence of this type of atoms. O2 molecules affects hn radiation, thereby creating oxygen radicals which are very reactive with other molecules of oxygen, forming a new O3. The newly formed molecule is again exposed to UV (hn) radiation, and in such reactions an atom and an molecule of oxygen are created. That process is known as the Chapman cycle. That damage shows a phenomenon called an "ozone hole", which is the reduction of the ozone layer in the atmosphere. These holes were first discovered in the 1970s in the southern hemisphere. Some scientists say that the causes of this phenomenon are natural and some that the main cause is human activity.


The Vienna Convention for the Protection of the Ozone Layer was signed on the 22nd of March – 1985, and in the 1987, Montreal Protocol on Substances of the Ozone Layer Deplete. It has been suggested that the Montreal Protocol is the most successful international agreement in the field of climate protection, and of the environment in which we live. It emphasizes the need to eliminate the emissions of various substances, which have potential to affect the appearance and causes of various diseases. It should be noted that the climate on Earth was disrupted due to increased concentrations of CO2 (carbon dioxide) in the atmosphere as a result of the use of fuel (coal, oil, gas). The fossil-fuel industry influences the development of the climate and natural irregularities that we experience on Earth. Therefore it should be regulated. Additional  environmental heating is known as the "enhanced greenhouse effect", and gases such as water vapor, CO2, CH4 (methane), N2O (nitrogen dioxide), CFC (Freon) and O3 -greenhouse gases are the main culprits causing global warming. It would not be wrong if you refer to global warming, instead of melting, because we are aware of how they are related, in the end, it comes down to the same thing.


Before the fossil-fuel industry existed, the atmosphere contained less chlorine-containing gases, i.e. CFC (Freon). The Freons are used in the production of air-conditioning units, refrigerators, deodorants, for heat pumps, in motor vehicles, aircraft and submarines. Through this, in production, use, repair and dismantling it may escape into the atmosphere, where it degrades in the process of decomposition to release molecules of chlorine, which act on the natural ozone layer, from which it creates bad ozone. It is alleged that the Freon has destroyed about 5% of the ozone layer and has contributed to the "ozone hole". Because of this damage, the effect of filtering is less, which leads to stronger UV radiation, which in humans may causes the weakening of immunity, subsequently causing skin cancer, eye problems and various other disorders and diseases.

The effect of warming, increased concentration of UV (hn) radiation from the Sun, chemical changes in the atmosphere and climate change, may have significant effects on health, including an increased number of respiratory problems and incidences of lung disease. Of course, we shouldn’t forget the impact of acid rain, which is created by pollution, which in turn has been caused by the gases that have already been mentioned. We are aware, that because of this imbalance, the ice in Antarctica is melting, causing sea level rises, and increased flooding in areas near estuaries, ports and harbors. This has contributed to damage to or destruction of, or the extinction of forests, desertification, increased use of chemical plant protection. We should not forget that there is the associated problem of risks to drinking water and an increased occurrence of epidemics and pandemics. The foregoing list is by no means exhaustive just a short list of phenomena that significantly affect the living world on Earth.


Bearing all of this in mind, the experts in the fields of meteorology, astronomy and climatology warn about, and point to, the complexity of climate change. For example, we can see the results of the work of scientists who live in Serbia, in the Serbian Web site, www.uv-srbija.rs, and in which we can see details about the intensity of UV radiation and the thickness of the ozone layer for the cities, Belgrade and Novi Sad. However, since all the warnings being given by experts around the world point to irregularities and changes, the question is: "Will it be sufficient to reach the eyes and ears of the competent and responsible people in the world’s governments and industries?". Due to the fact that all of the necessary changes would be likely to have effects on the world-wide economy(and more specifically the success of many companies), it may be that they would be unprepared to tackle some of the essential changes, at the expense of their country’s economy, or the profits of many companies.


Let us remember that the members of the UN (United Nations) have required that the use of many of the above-mentioned greenhouse gases be decreased, and in some cases discontinued completely. This action should significantly affect the outer layer, and by diminishing or reducing the amount of harmful gases should permit the ozone layer to recover. It is predicting that the impact of negative factors on the ozone layer will disappear by around the year 2050.


We can but hope that humanity lives long enough to see it come to be. 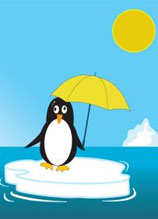